A friend showed me an article on the internet (It’s this new thing, everyone’s doing it.) people are in an up roar over the Merida from Disney’s Brave.  Disney gave her a ‘makeover’ so she’d look sexier. People have started a petition and I guess won. Disney has since pulled the images.
They say it corrupts her as a role model.
Am I the only one that feels this is wrong? People want a character created by Disney/Pixar is a role model for their children… Ok, let’s start with this:
Merida isn’t real. (Duh, I know right)
Merida is created by a company that’s bottom line is to make money. (Sure companies can do nice things for community/country/world, but face it, if they aren’t making money. Their gone.) So of course they are going to do everything they can to make the next buck. \
She wasn't that great a role model people. In the attempt to get what she wants she almost destroyed her whole family. I know I’d be a little cross at my son if he did what she did.
I scratch my head.
I think I’d encourage better role models…
Real role models…
I try to be the person I’d want others to be.

A new addiction has started…
Years back I started getting into vinyl records, I’m talking like ten plus years ago. I’d picked up some when my god brother worked at Tower Records. He got me a discount! Of course had money to waist on things I couldn’t listen to if they were discounted! Later,  I was given a nice record player by family, it wasn’t an audiophile turntable by any means, but I was shocked at just how good it sounded. I mean the turntable was a Sony from the 70s. But one day it had jammed and so my record collection was left to sit again for almost another ten years.
Then I started seeing there was an option to get my new music on vinyl with a free download code for the digital copies. That worked for me. I wanted the sound of vinyl and the convenience my iPod. I really don’t use CDs, and for the most part they just get piled into boxes for when the FBI comes knocking wanting to know if I’d stolen all my music.
Now vinyl was really starting stack up, and I’d never played any of it. I thought it would be a great idea to get myself a record player. A really nice record player! Anyone that knows me, understands that I can’t just get a low end anything. So I started looking… I was quite shocked at just how much a record player can go for.  “Audiophile” record players start at about $400 and go all the way up to almost $100K. I spent a week in sticker shock, I’m not normally one to succumb to sticker shock.
This was one of the few times where I had to weigh what I wanted with what I could afford.
I settled on a Music Hall MMF-2.2 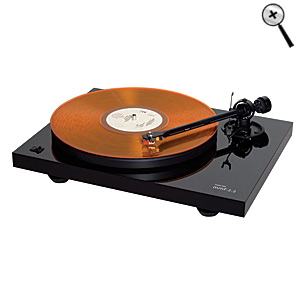 It’s a good starter record player with a great arm on it, but I’m thinking I want to move to a glass platter soon. When I wear this one out, I’m hoping to be in a position to get into something a bit grander. For now it’s a phenomenal player. Stuff I’d only heard on MP3/CD sound so much better. And I do mean better.  Phantoms by Fixx sounds better than the CD version. Like night and day. It goes from flat to alive. Talking to my cousin, it’s because the early techniques for transferring music from the masters to CDs where flawed and it hurt the end product in many cases.
Now that I have a way to play vinyl, I've watched my collection explode. Some of it comes from hitting second hand stores and finding old records at .99 all the way up to five dollars. The rest is Amazon’s fault! There ability to feed me vinyl is disturbing!
Now that I have a record player, I’m going to buy and write a story on an old ink typewriter. Mark my words…it’s going to happen.

Till next week,
Robert