It’s been a few, and knowing that I needed to get a blog update out, it was time to put the nose to the grindstone, or maybe better said, "another grindstone"
My friend Joe thinks that I'm a work alcoholic, I'm starting to believe him, now I just need to start focusing my powers to those things that make me more money! Look out Trump, I'm moving in.
Ok that's not happening, so lets move on.


A close friend of mine had their wedding in Hong Kong and so not willing to miss it for the world, I boarded an aircraft and traveled to the other side of said world to be a part of it. When I say be a part of it, I really do mean it. I think that everyone in attendance felt like they were part of it. It was one of the most touching wedding I’ve seen, and I have been to many weddings in my time. 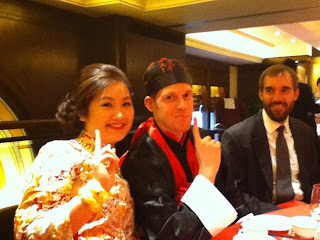 Hong Kong is an interesting place, once you get used to it. And once you are used to it, you really can't help but enjoy it. I found their mass transit to really be one of the best I have ever seen, Mark had told me a little about it before, but seeing it in action (and I do mean in action) it's something that anyone that wanted a PHD in transportation should study closely. Also the best drivers in the WORLD are Hong Kong bus drivers, I say this with all honesty, I've never seen drivers like them. They take these double decker busses and move them around crowds, thins roads, and up and down mountain roads that are perched over looking huge drops. Still they get everywhere on time like some kind of inhuman atomic clock.
The malls are fun because instead if sprawling out over miles of land they go up, and up, and UP. You don’t walk you take escalators up and down, each floor has a ring of shops so you walk a ring, go up a level then walk another ring.
I also want to take a second to thank Mark's family, they were all very kind of me and invited me out to do things with them, for someone that didn't have a real plan, it was nice to piggy back on their plans. I also seemed to run into them everywhere, even the airport when I was getting ready to leave.
Chris, Marks longtime friend, was great too, when everyone else was busy or sleeping Chris and I stayed up late at bars drinking while bartenders kept calling for last rounds after every drink we ordered. (Note to travelers: I think there is about 6 lasts calls in Hong Kong, starting at 2am and ending about 4am.)
I hope to see you all again soon and thank you for helping to make my stay in Hong Kong that much better. I was honored.

Around this I’ve been working hard on my first draft of Oil and Water, my first attempt at a Young Adult book. It’s sitting at 60,000 words now and it’s coming along. It’s not coming as smoothly as I’d thought it would and I find myself doing a lot of work on it to make sure I get high school details right. I’m also learning there are A LOT of things that I didn’t do in high school that maybe I should have! While Nic is going to be valedictorian and get the chance to give the big speech that was never something I wanted to do myself. So there has been a lot of things I've had to learn on the fly like. When should I have started applying to colleges? When should I have taken my SAT? What day should I have taken them on? When should I start hearing back from colleges? How do you get a full right to a college?
Kennedy on the other hand was much easier for me because while we both got good grades in high school (And only starting in high school, let me be clear on that) I wasn't pushing to be some kind of all state academic superstar. So trudge on through this first draft marking out all the things that I enjoyed from high school and finding a lot of things that I missed wondering why I didn't try them at the time.
My feed back is back on my Cooperate Policy and I'm looking forward to doing some cleanup and getting that to editors before I look to release. The cover is coming along and I might do some sneak peak stuff on it soon. But as long as I don't let other author things I want to do get the way, I'll be on schedule and you'll be able to pick it up at the start of October.


Anime, I'm not sure what's happened here, but I'm not watching very much if it, by that I mean I haven't watched anything in months. I'm still reading a boat load of Manga, but no real Anime. I don't like this, some of the best stories I've ever seen are based in Anime and I don't want to start limiting myself to less. I'm going to have make sure and force myself into following again, find some stories and stock up on episodes.

Porn and Sex in literature.
As I sit here I'm reading a draft of a book that I've been asked to give feed back on and there is a sex scene. I looked up from my seat at work cafeteria and I wondered what people would think if they knew just what I was reading right now? Of all the books I read, there is sex in many of them. I'm willing to bet the people reading around me, there sex in those books too. So I ask; is it really ok at work? Because there are no pictures? Why can't I just sit here and read a playboy with a brown paper front? Only I'm reading it and no one else knows. Then again if I turn the playboy around and show it to people is that bad? How about if they read my book? Or if I read aloud?
Such a strange world.

What am I reading:
A slow few weeks. I spent a lot of time writing and reading a friend's book and as it's not published it I won't tell you about that one.
How ever I found time for this one:
The Art of Fielding by Chad Harbach - Sarah Dessen turned me onto the book and I gave it a try, I'm liking it! I'm the throws (inside joke) of the end and I have NO idea how it's going to finish. Every well done, very good reading. The Characters are a mess!

I'm going to be doing a post every other week for a few,  just a lot of writing I need to get done.

Robert
Posted by robduf at 1:00 AM