Once the Olympics are over I’ll be able to sleep! I keep finding myself staying up all hours of the night to watch live events. Thank goodness this only comes once every 2 years; I think I’d die from a lack of sleep if this continued.  Not that I sleep much anyway, but I need what little I get.
Besides living on caffeine, I believe that these Olympics have been very successful, even with few black marks that I’ve read about.
The criticism I’ve heard the most is that NBC’s only showing online content to those spending more than $100 on their cable/satellite subscriptions. I do, so I didn’t think much about it till I talked with many of my friend’s that don’t even have a TV setup. So those in the US are left blacked-out while the rest of the world has access to free, easy to use, streams.
I don’t think that anyone should have to pay to watch the Olympics, sure if you go see it in person you should pay to have a seat in the arena.  But having to pay for the televised coverage? No. It’s  so monetized with ads already it’s almost painful.  Every time the ads change it kills my video for a few seconds, which sucks when trying to watch basketball. 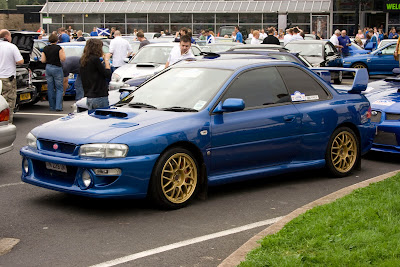 I’m getting the bug again. It’s an evil and expensive bug when I catch it and my immune system is ill fit to handle it.
It’s time for another Subaru project!
So I’m going to take my heavily modified Subaru RS and make it a different heavily modified Subaru.
I want something that looks a little different and is easier to use on the street than the current configuration.
I’m looking at a company in the UK that makes 22b body kit, my current plans are to import it and then have it repainted in the traditional 22b blue.  Then I want to update the engine to a 2.5 STi Spec engine and tranny and set the wider stance on the tires. I will label this the first 25b.
My first plan is to find a 05 -07 STi donor car for the base parts I’m going to need for the mechanical work.

Birthday!
I’m 35 now! It’s been hard days of drinking and having a good time. Part of the celebration was enjoying a cabin with friends.  Of course none of this helped with how far behind I am with my writing. I’m going to buckle down this whole weekend and get another chapter or two done before Monday.

Online classes
I’ve been taking an online Sci-Fi and Fantasy class, but the format revolves around peer grading. It’s a free class, so my peers are just what you’d think. I’ve talked with others that have been taking the class locally and we all agree we aren’t getting  what we want out of it. Sounds like we are going to drop and never look back.
Things I'm reading:
I Have a lot of books that I’m reading right now that I’ve talked about before, but because of the class I’m in I’ve not completed them yet.  But here is the new one.


Royal Assassin by Robin Hobb – The first book was good enough that I needed to start up the second right away. I’ll get right into the third book next for sure.

That’s it for now, just some quick points into my summer.


I’m off to get a little more drinking in before my weekend. J
Robert