In the words of William Shatner
CON!!!!

Easter Weekend was Norwescon and I put an ad out in the handout magazine and so I thought it would be fun to go as well!  I found there was like a million panels on writing craft, so well worth my time.

For those that don’t know what Norwescon is, it’s one of the largest regional science fiction and fantasy conventions in the US.

What an interesting 3 days for my writing education!!!
I met many different kinds of authors and even had the opening page to Corporate Policy critiqued!

Below you can find my review on each panel I took, if you'd like to read about it. I have to say, it was cool to be able to hear from and talk with authors that are well sold, to those that are about at the same level I am right now, just getting started. Every author I saw at the convention was, friendly, willing to take a moment to talk after a panel or in the halls, and everyone of them truly pleased help a starting author.

I’m already got some ideas for a panel or two I’d like to added next year and I’ve got the goal of becoming a panelist if I can. It’s something that I need to look into. If you can’t already tell, I’ll be back there next year no matter what.
After talking with Del, the last few years they hadn’t had many writing panels/workshops and so this year was a great step back in the right direction for them. Bravo.

The list of panels I took:
First Pages (where I was critiqued)  - Cat Rambo and Caren Gussoff

This may have been one of the few panels based on the actual art of writing and less about the business side of it.
It was geared directly at our work and it was kind of neat to hear them read our work aloud. It gave me chills! They picked about 9 first pages. Mine was the first read and it was cool to be the first, I think because I was talked about the most. The overall feedback I was given most:  I need to tell less and show more.  Something I have been working on.

But when the class started and then Cat stat down and her first word were “Dan Hollis….” I was like OH $H!T”

There was one opener that really took the cake if you ask me, it started out talking about Facebook poles and I loved it. Del agreed that it was the best one of the ones they picked to read.  I hope it get published, it could be epic.

This was a little on the slow side, but the message was good. It was about making sure you are giving good descriptions to paint a world about your reader. Not tossing them into a white room that has no details.
As I said, slow, but I’m glad I went!  It’s something that I need to work on as well.

This was one Del wanted to check out, it was more on the making stories and writing for RPG companies.  But I did get a few details about the biz that I didn’t know before. I have to say, listening to Pathfinder’s James Sutter talk about the business was very enlightening and it was fun to talk with him a few minutes after the panel.

This was a good one, with well-spoken people. It showed me about the world of making a synopsis for a novel. This is something that I have been able to avoid with independent publishing and really didn’t know much about it.  That will all change later this year when I start looking at the larger publishing world.
5 page synopsis, 30 page synopsis, making character arcs, and query letters. They gave you the 50, 000 foot view of it.
Need to look at getting the book “Brewing Up Fine Fiction” by Irene Radford.

Another thing they talked about was, building up your chops from short stories to novels takes time. Same with shorter novels to longer novels, it not something you can just jump into.  I’ve been working with novellas, 50k to 58k range for the Dinatech series, I’ll made one manuscript at 99k, I’ll be interested to see how my next 100k attempt looks, because my last full novel attempt was by accident, it was only supposed to be 50k!

There was one other person on this panel and I didn’t get their name I really should have gotten that.
This was the first really funny writing panel I’d had and Lisa was a great moderator! Dennis and Lisa play off one another very well and I think the two of them should write a book together.  It was a good look at some things I’d already knew about the YA (Young Adult) writing field.  Like Sarah Dessen, most of the authors on the panel didn’t really know that they were making a YA book till they had made it.
It was very interesting to hear them talk about how adult the YA field really is and that many adult situations do get put into this genre of book. The major factor is the age of your protagonist will label you YA from what I understand.

This was not a good panel and the worst one that I attended at the con.
All the authors that had gotten lucky or found the right break in their first book,  so there was no real suffering for years and multiple books to get one sold.
I really didn’t take much away from this panel. It would have been a great panel for Mike Shepherd Moscoe to be on!

I’ll start out by saying, this was another very fun panel and that Nancy Kress made this panel amazing.
NANCY KRESS IS MY HERO!
Really she had some great advice and even went so far as to say “Be careful whom you sleep with in this business! Because they are going to be there for life. Really!  They will be across the table from you at one these conventions and you’ll just be shaking your head, what was I thinking!”
I was talking with her the next day and she confessed she’d had a drink before the panel felt she might have made a fool of herself.  But not in my eyes, the stories that she told about her critique groups and getting published were really great.
Eileen Gunn also passed on a great quote she’d been told:
The key to becoming a great writer is: One’s ability to overcome your natural and very real revolution to your own writing.
That one got around of well deserved applause.
Mike also talk about having to cut out the first 20 chapters of his first novel before he could get it to sell. This would have been great in the “How I Sold My Novel” panel as I was saying.

This was a very informative look at how authors are using the e-publishing world to release books that they can’t or won’t traditionally publish. Some of the information they passed on I knew and was doing. It was good to see that I wasn’t off base with my work so far and that when I was talking with the panelists, it sounded like I was on the right track! Ken told me in the next panel that he felt I was doing the right things.
I will say I could have spent a little more time with formatting for Electric Disease and so that will be a priority for Corporate Policy.

This was a good panel and I glean a little more information out of it. It was interesting to talk with others on how they are promoting themselves and find a few new ways to push myself out there.
I need to find me a podcast buddy! I’ll have to look around for that.
Also, I might look at expanding my beta readers group to some people that I don’t know at all!

This one had panelist that were independent publishing owners, but they were doing it in the traditional format of larger publushers.
Things you’ll  need for a good publishing house of any kind:
Story Editors, Copy Editors, Graphic Designers, Art Directors, Type Setters, PR Directors

AOA Publishing is not here yet, but maybe soon? J

Ones for fun:
Victorian Sex -
OMG! This was a great panel with standing room only by the time we got there! We thought it could be fun after all work panels we sat through that day. With a few drinks in us, we headed up to see what it was all about.
Some of the stuff they did back in the Victorian times was just simply crazy! If you get the time and really want to know, you should brows your favorite search engine for Victorian Prostitution! There are a lot of pictures of the time and might not make you feel so bad about what you see today on the web. ;)

Monster Mash -
This was our mid Saturday cool down workshop and it was a BLAST! You cut up stuffed animals and you sew them back together into something…horrible! 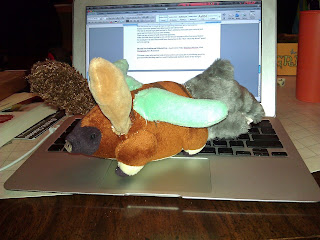