I'm back from the grindstone!

Has it been a while?
Yes it has!
I've been working very hard for you!
The last time we talked I was deep in editing hell! My time with the Fairwood writer type authors was very eye opening, but it left me with the ragged tatters that was once my (almost ready) manuscript. It was no longer almost ready and it was in need of some serous updates. I'm sure I've talked about this before. The further I got behind in my release date the more I felt I should cut back on other activities. So I cut the blogging, the reading, the writing. Everything went into getting the book to my copy editor!
But it's done! Now released on Kindle, Nook, and within a week you can buy both the first and second book together in a 5x8 paperback that you can really hold and stain up with coffee rings. It's about 375 pages, that's thick enough you might be able to read the title on the spine and it will do some damage when tossed at a misbehaving loved one. My physical book will have many handy uses, and if all else fails, you could … I don't know … read it?
My proofs are in the mail and I thought; What should I be doing now!?  I checked my blog and blanched at the fact I'd not talked to you since September, early September.
It's December now, exactly 2 months after I left you. I hope you've gotten all your shopping done and are fretting about how in the hell you're going to get these damn boxes wrapped! Even that really weird one with the round sides!
Late October I flew to the east coast and I got to meet some friends that I'd only ever talked with on the internet. It was her wedding and while she didn't make me the Made of Honor I was honored to have been invited.  While I was there I bought a new car :D Most people can't say they own there dream car. I do! 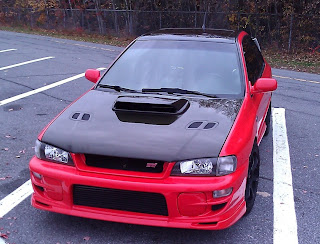 She was named Asuka, after much debate in the family. She's a 400+ WHP RS to STi conversion. I named her Asuka, because of the color, and if you don't play nice with her she'll kick the shit out of you! I've made a website for my Subarus, you can follow the  blog at: http://www.subaru25b.com
In my trip of driving across the United States, I got to see a lot of neat things, also I didn't get to see as much of it as I'd like. I'm going to have to do the drive again sometime in the future. I'll have buy my next car on the east coast and plan to take a little more time off to do tourist like things.

I found a new channel "The Smithsonian Channel" All I ever watch in Military Channel and History Channel. This one is on the same lines but it's in HD and covers some other areas of the past that I also enjoy. They had this one feature on the Concord and I couldn't stop watching. If you like this like of programing, I strongly recommend it!

Moving forward I hope to get back to a more active presence on my blog, I'm going to go back under the hood and start looking at getting a manuscript ready for traditional publishing. I've done enough of the work myself! I want someone to do all the work for me!

What have I been reading:
A Game of Thrones by George R.R. Martin - Ok at this point I have to admit, I'll take a read at anything! I was sure I was never going to read this series, now here I am! I just finished this book and turned directly to the second book. It's an impressive read and I think there are lessons to be learned for anyone that wants to learn to write.
Thirteen by Kelley Armstrong - This book is the end of the Woman of the Underworld series, I've been reading her work for near a decade now. I've always liked her books, but this thirteenth should have never been written. It feels so mailed in, it hurts my feelings that she doesn’t seem to care. If she wanted to be done with the series than she should have just stopped till she was ready to come back and do it right. it's been said in the community she was looking to focus on her YA carrier. I'm fine with that, but don't effect your integrity to move on. I'll be very interested to see how her next book looks.

What have I been listening to:
M83 - It's a band my brother has been talking at me about for a few months. I at last got a chance to see them live at Deck the Hall Ball at Key Arena. While the sound in that place sucks ass, M83 sounded really good! They looked to be a lot of fun. I'm going to have to get tickets to their next concert for sure.  Also Grouplove on a side note.